Q: Give us a little background on your breastfeeding journey with twins. 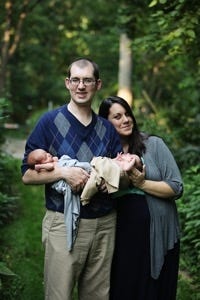 I found out that I was having twins very early into my pregnancy. After some abnormal prenatal testing, I was referred to Maternal Fetal Medicine, which specializes in high risk pregnancies. At week 12, I received devastating news. One of the babies was significantly smaller, and it was looking likely that I would lose one, or even both, of my babies. I spent the next 20 weeks going in at least once weekly. I got ultrasounds every other week. As the weeks progressed, my little babies beat the odds and kept growing. The weight difference remained and the doctors were very watchful. Baby B had an abnormal cord insertion and wasn’t getting the nutrients that Baby A was. Despite the doctor’s concerns, I never had twin-to-twin transfusion syndrome. When I made it to viability week, we all breathed a sigh of relief. At 28 weeks, we began to feel even better. At 32 weeks, we celebrated. They decided that because of the weight difference and abnormal cord insertion, they wanted to schedule a C section between 34-35 weeks. At 34 weeks and 4 days, Shane was born at 6 lbs 4 oz and Cody was born at 4 lbs 13 oz.

Before the twins were even born, my wonderful husband gifted me the book Mothering Multiples Breastfeeding and Caring for Twins or More. This book proved to be a wonderful resource. I read most of it before the twins were born and have referred back to it on numerous occasions. This gave me lots of information. 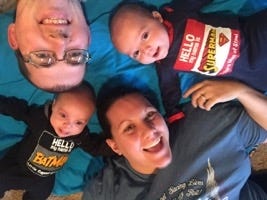 As soon as the boys were born, the hospital staff got me pumping every three hours. It was very frustrating at first. With colostrum, very little liquid actually comes out. I would painstakingly scrape every drop I could into the small bottle. I felt so defeated for the first three days because I wasn’t able to feed my tiny babies what they needed. C sections can often make it take longer for milk to come in. I pumped diligently every three hours, setting alarms to get up through the night. I used the hospital pump and their equipment.

After the first day or so, I was able to breastfeed the boys. I was definitely still very uncertain about how to even begin the process with two babies. In this way, our NICU visit ended up being a blessing. The staff didn’t hesitate in getting me started. I had brought my twin nursing pillow to the hospital. They had me get it out and brought me both babies. From then on, that’s all we’ve done.

The staff still had me pump after every feeding. When my milk came in, I was overjoyed. It very quickly became evident that I had a very abundant supply of milk. I filled both fridges in the boys’ rooms at NICU and started freezing milk in the NICU freezer. Because the boys needed to grow and gain weight, the hospital had me feed them every three hours on the dot. This continued for the first month. I’d feed them and pump. It takes so much time! Go to their room, change their diapers (my husband helped), sit down, get the pillow on, have someone bring me the babies, nurse them, put them back, pump, clean all the pumping pieces. My husband and I became very efficient, but it still took almost an hour. Two hours later, the process started all over again!!

I kept this routine for the first month. Then, with the pediatrician’s approval, we went to on-demand feeding. I still pumped after every feeding. Around month three-ish, I listened to a family member’s advice and dropped the pumping after feeding them. I started back to work and pumped three times during the day. My supply dropped drastically. Where I was producing so much milk that I donated some to a mother in need because I didn’t have the storage space, I now was struggling to produce what they were consuming while I was at work. Around month four, it got worse. I set alarms to get up and pump during their longer sleeping stretches at night, I took some herbal supplements, I upped my water and fiber intake. These things didn’t do much to help. Thankfully, I had milk stockpiled. Around month five, the boys started solid food. That helped me because they seemed to be able to get full. It’s now almost month seven. I still pump at work, once before bed, and once through the night. The boys don’t need quite as much milk through the work day, so I’m hoping to make the milk I have stretch at least another two months.

Q: How does using a breast pump help you nurse your twins? 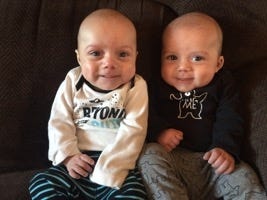 My breast pump helps me because I can work and still give my twins breastmilk. I pump three times at work, approximately every three hours. I’d recommend reviewing the pumping at work laws, so you are familiar with them. I pump, wash the parts, then store the milk in a mini-fridge. At the end of the day, I put the milk in a cooler bag with an ice insert, and take it home. At home, I bag the milk in individual portions in breastmilk bags. It then goes into our upstairs freezer, stacked in a loaf pan. Once we’ve accumulated a decent amount upstairs, I put it all in a grocery bag, label the approximate date range, and take it downstairs to the deep freezer. I bought to bins from the dollar store. The newest milk goes in those bins and gets put at the bottom of the freezer. The oldest goes to the sitter. Eventually, the milk in the bins becomes the oldest, so I’ll use that. When the bins are about empty, I put the leftover milk in a labeled bag, restock the bins with the newest milk, and start the process all over again.

Information provided in blogs should not be used as a substitute for medical care or consultation.

NEXT →
Meet Laura - How She Pumps for Twins!